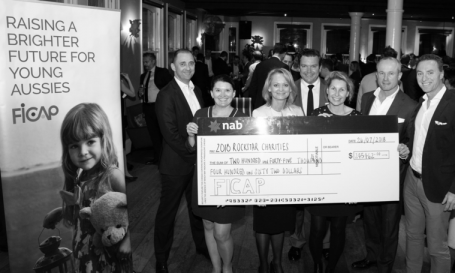 The Finance Industry Community Aid Program (FICAP) is gearing up for its “Who Wants to be a RockStar?” fundraiser, with the new charity announced this month.

Last Thursday, the FICAP committee and the charity beneficiaries from this year’s fundraising gave an update to sponsors and industry supporters.

Raise Foundation, which offers youth mentoring programs, said that through FICAP, they were able to help a record number of mentees this year and have mapped out a scalable plan to help 160,000 youths.

“Because of your support, we were able to do this … you’ve inspired us to run a charity with heart but also have some business smarts,” said the foundation’s spokesperson.

FICAP supports three charities each year and the second charity is Learning Links, a youth literacy and numeracy support program.

Through FICAP, Learning Links said that they were able to provide 45-minute weekly tutoring programs over 10 weeks at a group of schools, helping children there who were, at worst, three years behind on their numeracy skills.

The third – and the newest – charity (Mirabel Foundation was this year’s major charity) was announced last Friday: the Livewire program of Starlight Foundation.

Livewire offers social and creative programs for adolescents who have been in and out of hospitals due to their illness.

FICAP’s director and JB Were chief executive Justin Greiner said Livewire was chosen out of the 25 charities shortlisted for 2019.

It was a tough job choosing one from the 25 as they are all deserving of support but Livewire stood out because of the impact it has for teens who still need that social and creative outlet despite their health issues.

Livewire, Learning Links and Raise are the beneficiaries of the 2019 FICAP ‘Who wants to be a RockStar?’ to be held at the Ivy on March 28 next year.